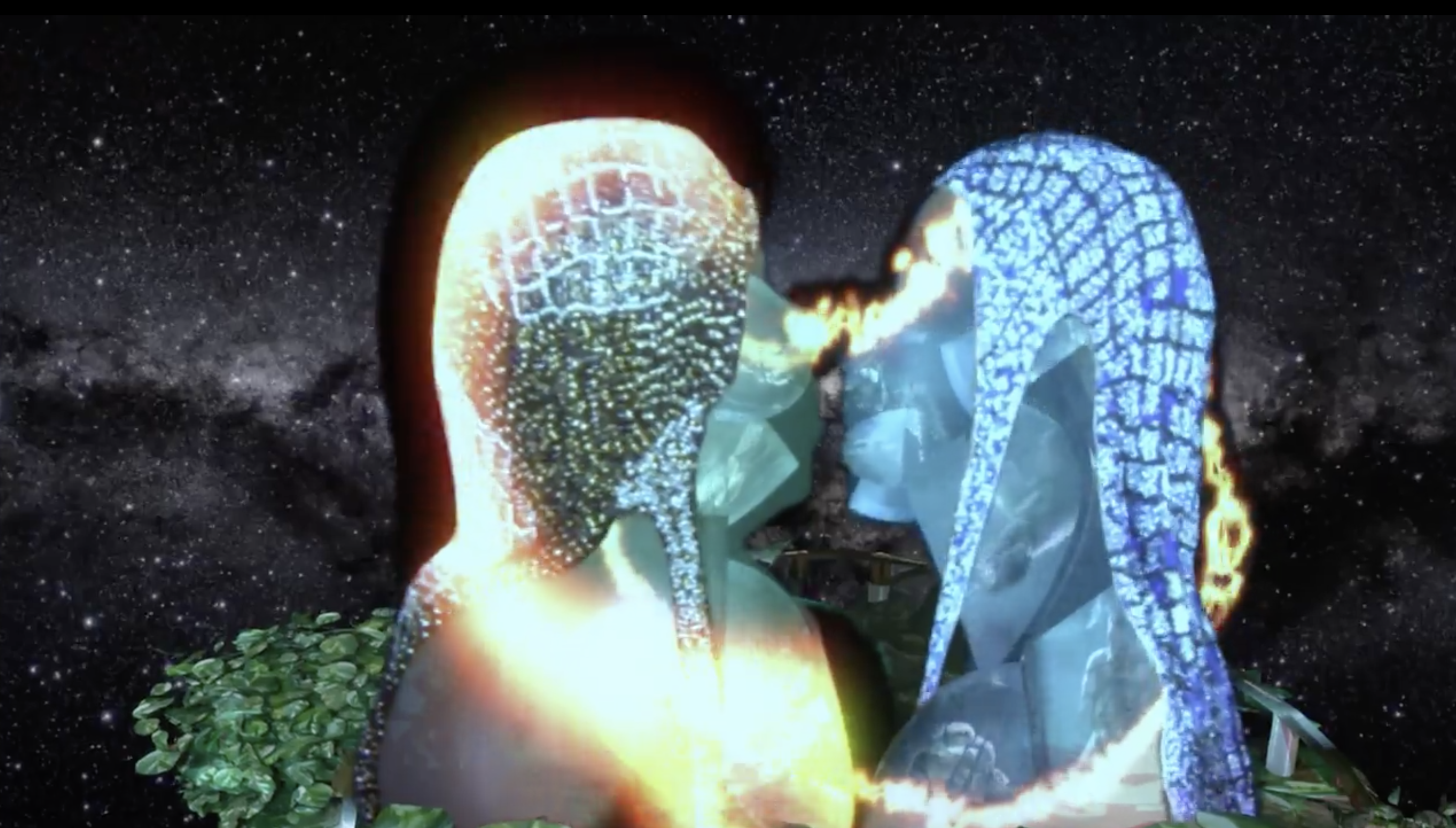 I was born and raised by a mentally ill woman who was in a mental institution. I had two gay brothers and a heavy involvement in nightlife since I was 13—all of these are safe spaces, alternative space. The galactic-looking visual 3D film is a metaphor for the safe space that I understand as someone who was constantly externalised.

ASAKUSA is pleased to announce the opening of "Coloured Bondage", a solo exhibition by New York-based artist Jacolby Satterwhite (b. 1986, Columbia, SC), which unleashes the subconscious and the extravagance of digital Surrealism.

Using thousands of drawings and cassette tapes left by his schizophrenic mother, Satterwhite stitches together the virtual and the real: his mother’s inventions and his politicised body merge through 3D animation. Within his undulating imagination between the personal and the political, we voyage through vital moments of his queer life. The endless love-seeking in a relationship of obedience becomes a euphemism for nostalgia within utopian pornography, and evokes psychological anxiety for excessive desire.

Central to the exhibition is Satterwhite's new 3D film Avenue B (2018) which begins with a mystic ritual: Satterwhite's body is hung naked and splashed with paint to the soundtrack of his mother’s enchanting gospel song. As the space turns into a digital arena, his body is freed from the constraints of gravity and becomes a digital avatar——mirrored and cloned. “To put myself in a virtual world is a political gesture,” explains Satterwhite. His virtual reality beams towards the Afro-futurist escapism while the virtual camera whips around at impossible angles, exacerbating a political representation of his own body. True to all works by Satterwhite, the film generates an abundance of techno-social signifiers of media, sexuality, race, labour and consumerism, all of which conjure into a web of art-historical references from magical realism, art brut and psychedelic motifs.

Exhibited alongside is Chigono Soshi (1321, Collection of Daigoji Sanshui, Kyoto), a picture scroll of the 14th century Kamakura era, which describes the relationship between chigo (young trainees) and male monks at the Japanese medieval monastery.
Kanjo is a ritual of the first iteration of sexual intercourse with a master monk, which manifests the boy into the incarnation of a deity——a passive presence subject to the order by the priest. The scroll describes how the juvenile boy physically accommodates these procedures. Over the course of history, these customs spread to the courts, the samurai, and the Kabuki world, until eventually secularized in entertainment sex houses in mid-Edo period (late 17th century). The literal translation of danshoku (homosexuality) is “male colour” in Japanese, and the colour intensifies as associative meanings become layered. The exhibition therefore considers the intertextuality of human bondage, which subjugate one to a specific context of living. It sets forth historical dimensions of ideas on the conception of safety, power, and sexuality.

"Coloured Bondage: Jacolby Satterwhite x Danshoku" is held as part of "Asakusa Entertainments", a public address and film screening event curated by Asakusa as an adaptation of the lecture "What is Critique" (1978) by Michel Foucault. The exhibition is supported by Arts Council Tokyo, and the Asahi Shimbun Foundation.

The Art of Not Being Governed (Quite So Much)