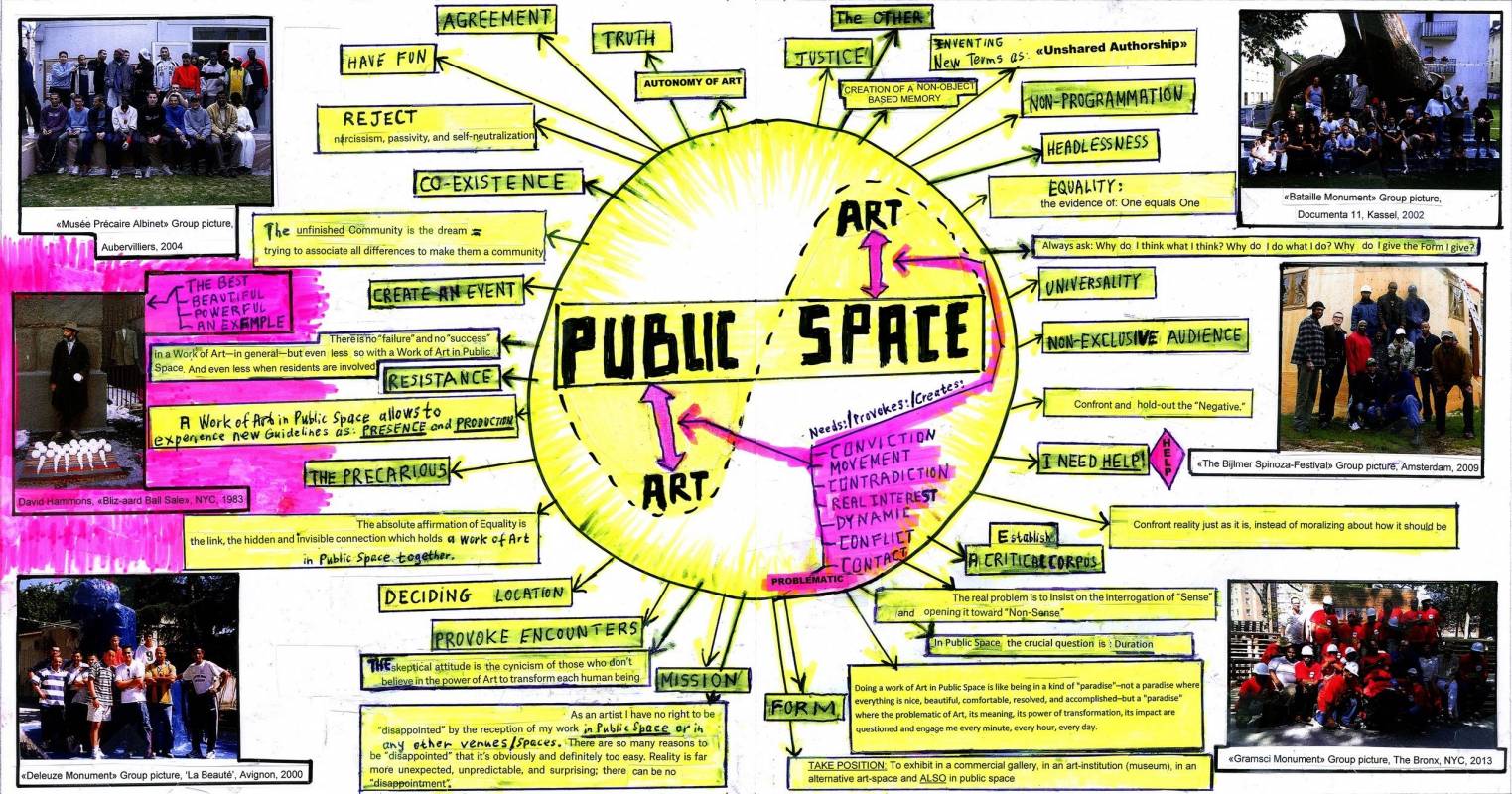 ASAKUSA is delighted to announce the exhibition "Radical Democracy" with artists Thomas Hirschhorn and Santiago Sierra, whose artistic practices engage with selected social groups, often facing ethical questions. The exhibited works articulate divisive fissures of political and economic disparities exsisting beyond sanctioned consensus, and provoke the agonistic practice of valuing and sustaining the dissent—democratic dialectics advocated by art critic Claire Bishop. The differing context of their challenges suggests art’s expansive potential as well as its limitations, and forms a critical position to comment on Tokyo’s political landscape imbued by media campaigns and internalisation of power structures. The exhibition includes distribution materials by Sanya Labor Welfare Hall Action Committee, a local support group for the largest day-labourers' district in Tokyo.

Using materials such as tinfoil, Xerox copies, adhesive tape, and cardboard, Thomas Hirschhorn gives form to cultural critique and composes questions about consumerism, media spectacle, aesthetic value and moral responsibility. Since 1999, Hirschhorn has dedicated four monuments to his most admired philosophers—Spinoza, Bataille, Deleuze, and Gramsci. Paid residents of Forest Houses, in the South Bronx, New York built his last endeavour, Gramsci Monument (2013). In this work, the artist pays homage to Antonio Gramsci (1891–1937) by following his cultural strategy of a ‘war of position’², which describes a process of building strength in social foundations by creating alternative institutions and intellectual resources of a civil society. The temporary monument, now demolished, appeared as an outdoor assemblage of plywood shelters comprised of a community library, bar, lecture platform, rooms for children’s workshops, and an onsite radio station running daily programs which promote leaning, discursive and other expressive practices to generate an autonomous culture. The structure constituted a critique against urban consumerism, which deprives the fundamental freedom to think and voice as individuals. The exhibition includes the artist’s lecture slides, interview, and texts, as well as a selection of publications by and about the four philosophers.
Marked by sensations of unease and discomfort, Santiago Sierra’s work captures body politics exhumed by the conditions of market capitalism. Tattooing a continuous line across the backs of four prostitutes for the price of a Heroin shot, having paid workers sit inside cardboard boxes or confining a man behind a brick wall for 15 days within a museum; his judiciary-based instructions make power structures visible, as marginalized individuals in adverse circumstances are often displayed as spectacles in material dimensions of their contracts. In 133 Persons Who Dyed Their Hair (2001), Sierra called illegal street vendors—mostly immigrants from China, Bangladesh, Senegal and South Italian―to congregate at the warehouse and have their hair dyed blond within the site of Venice Biennale. The action highlights the vendors’ parasitical presence at the very intersection of art and tourism, and inscribes a situation inescapable for visitors to confront. The hour-long video shown in the exhibition documents an assembly of the stateless immigrants and refugees who gathered to receive 50 euros in hand. The scene foregrounds the socio-economic hegemony and examines the conditions of racial bias at the heart of a cultural Olympiad.

According to Chantal Mouffe and Ernesto Laclau, "Radical Democracy" does not only accepts dissent and antagonisms but also depends on it, and argues that there are oppressive power relations in society that must be made visible, re-negotiated, and altered. The exhibition urges a crucial importance to seek intrinsic borders of difference in a seemingly homogeneous society. The following questions may be contested: What emotive prompts evoke questions of ethics? What instigates desire to move beyond consensual intertia? How is it possible to effectively negotiate between social imagination and social reality?

"Radical Democracy" is curated by Asakusa and Dr. Masaru Araki, Vice-President of Okayama University. Asakusa would like to thank Sanya Labour Welfare Action Committee for providing their distribution materials, and Embassy of Switzerland in Japan for their support to realize this exhibition.